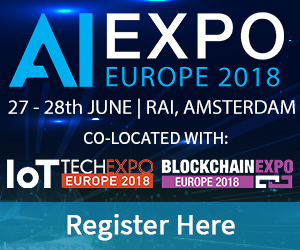 The AI Expo Europe is set to arrive in the hub of AI innovation, Amsterdam, The Netherlands, this Summer (27-28th June) with an aim of ‘delivering AI for a smarter future.’ The well-connected Dutch capital is known for its unique, rich culture and canal-side views and was even awarded the European Capital of Innovation in 2016 by the European Commission. The city’s AI scene is thriving with the arrival of a world-class artificial intelligence market by early 2021 and venture capitalist investment. The AI hub will be created in collaboration with the University of Amsterdam (UvA) and the City of Amsterdam at the Amsterdam Science Park, a place where education, research and entrepreneurship will come together as one. Geert ten Dam, president of the UvA’s Executive Board stated that: “Amsterdam is widely recognized both in the Netherlands and abroad for its leading scientific expertise in the area of AI…”

According to startup Genome and I Amsterdam, the city of Amsterdam also has a thriving start-up community, ranking 4th in Europe after London, with over 1,438 start-ups listed in the city. The city is attracting venture capital investments from abroad, in 2017 local start-ups raised €646 million from VC funding. The AI Expo Europe is set to stage the hottest start-ups and innovators in the world of Artificial Intelligence and the Internet of Things. Their London show attracted popular innovation incubator partners including IBM, Indiegogo and Arrow. Start-ups and innovators can apply for a specialist start-up innovation incubator package by emailing the team on [email protected] The AI Expo Europe is set to be the place to network, promote and showcase your brand alongside an audience of c-suite executives and venture capitalists.

The AI Expo Europe Conference and Exhibition is co-located with the IoT Tech Expo and the Blockchain Expo, where attendees can learn about the convergence of three technologies (artificial intelligence, blockchain and IoT) that are driving IT spending in 2018. Over the two days, attendees can get access to a co-located exhibition with over 300 exhibitors, 18 conference tracks with a brand new AI agenda set to feature four important strands in the AI ecosystem. These are:
• AI in the Enterprise
• Data Analytics for AI & IoT
• AI and the Consumer
• AI Technologies.
Speakers are to be released soon, view last year’s here, along with exclusive networking opportunities, including an official app and a networking party, where you can network at the thought leadership conference with European based innovators from around the globe.
Click here to register for your free or paid pass to the Europe 2018 event on the 27-28th June in Amsterdam.
Early bird rate ends Friday 18th May so if you are looking for full conference and networking access, you can save up to €250 on your conference and networking pass (Gold/Ultimate) when you book then.

Britain has built the world’s most advanced genome-sequencing infrastructure
Top predictions for what comes next in 2022
The future belongs to AIML-powered ecommerce
Semiconductor revenue grew 25.1% in 2021, exceeding $500 billion for the first time
China wants to produce its own hard-­tech companies in order to become less reliant on the hostile West